Should Your Clients Fear a Recession?

The term recession has gained a lot of airtime recently. Fears of an economic slowdown seem to be everywhere. And many folks are tuned in to the fearmongering, allowing it to affect their daily lives. 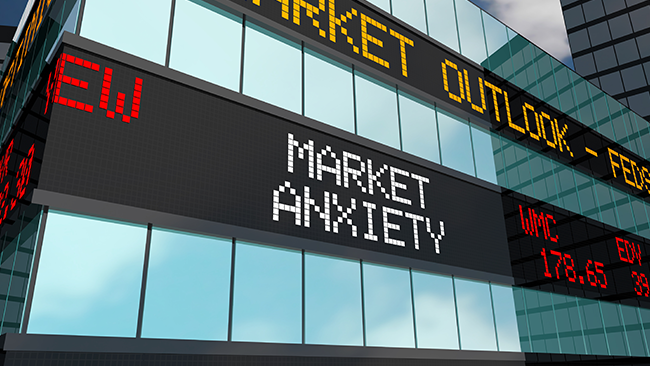 The word recession gets tossed around in the media like a radioactive hot potato. The possibility of a recession is sensationalized both in print and television to get the public’s attention. And it’s working because many people (your clients) are listening intently for any potentially negative news about the economy.

Quiz time: Why is the news media trying so hard to get the public’s attention?

Because it’s big business… it means more viewers and more advertisement money for them.

The media knows that any time they bring up a recession, it’s likely to evoke negative emotions for many folks including fear, worry, anxiety, or stress. Perhaps, you’ve read or watched a recent news story about the “threat” of a recession, and it made you feel concerned too.

But is there a recession looming? Or is it all a ploy for more attention? Maybe, maybe not.

Let’s dig into this a bit more.

What Is A Recession?

Merriam-Webster defines a recession as “a period of reduced economic activity.”

Recessions are officially declared in the United States by a committee of experts at the National Bureau of Economic Research (NBER). They determine the peak and subsequent trough of a business cycle, and thus an officially recorded recession.

The NBER’s own website defines a recession as “A significant decline in economic activity spread across the economy, lasting more than a few months, normally visible in real GDP, real income, employment, industrial production, and wholesale-retail sales. A recession begins just after the economy reaches a peak of activity and ends as the economy reaches its trough. Between trough and peak, the economy is in an expansion. Expansion is the normal state of the economy; most recessions are brief, and they have been rare in recent decades.”

Many journalists will simplify a recession as two consecutive declining quarters of inflation adjusted (or real) gross domestic product (GDP). However, this can happen even when the NBER would not officially record a recession based on their stated definition.

How Often Do Recessions Occur?

For example, there were four recessions between 1945 and 1960, averaging a recession every 3.75 years.  There was also a recession in 1980 followed by another one two years later.

On the other hand, there have been periods of time in which more than decade elapsed between recorded recessions. Even though it happens less frequently, there have been longer periods of economic growth recorded in history and it’s likely they’ll occur again in the future.

In the past 50 years, there’s been a recession recorded six times. This is why you’ll often hear pundits on TV say that a recession will happen approximately every decade, and if we get beyond 10 years of economic expansion without a recession — fears are heightened even more.

How Long Do Recessions Last?

With a few exceptions such as the Great Depression in which the economy was in a recession from 1929 until 1938, most recessions are often short-lived events relative to history. They’re not nearly as scary when viewed through a broader lens and can actually be viewed as healthy events, allowing for further economic expansion to continue.

Many of the recessions recorded during the past 50 years lasted less than 12 months, with only a few lasting a few months longer. Even the Great Recession, the worst financial crisis since the Great Depression, lasted only 19 months.

How Many Recessions is Someone Likely to Experience During Their Lifetime?

Many folks can expect to experience at least seven recessions during their working adult lifetime. For someone who started working in their 20s who are now in their mid-60s, nearing retirement — they’ve most likely experienced six officially recorded recessions to date.

Some may be more memorable than others. For example, you likely remember how you and your clients were affected in 2008. And why is the 2008 recession perhaps more memorable (besides the fact it was the most recent and historically the worst since the Great Depression)?

For those in their early to mid-60s, retirement account values in 2007 were likely the highest they’d ever been during their working years. Therefore, the impact of the recession and subsequent impact on their investments, was felt much more deeply than previous recessions when their retirement accounts were small or non-existent.

For those currently transitioning into retirement, they could experience another two or three recessions during their lifetime. But navigating anticipated events like this doesn’t have to be scary or evoke negative emotions if they’re properly prepared to deal with the inevitable.

That’s where you come in as the financial professional. You can help educate your clients and potentially ease their minds.

Because they may be asking you...

Does a Recession Mean Certain Doom for My Retirement?

The answer to that is No. Recessions naturally occur as part of a business cycle. Expansion is a natural state of a healthy economy, but at times the expansion may slow down, or even retract a bit. The slowing of the economy, in large part, is what defines a recession. Investment market meltdowns are not part of the criteria for declaring a recession. However, they may be a result.

The slowing of an economy may trigger alarm bells of a recession even when the fundamentals of the economy are still strong.

Wait? Two consecutive quarters of slower real GDP. Was that a recession?

Maybe, maybe not depending on who’s definition you subscribe to.

Meanwhile, the fundamentals of the economy seem to be strong and intact. Companies are still reporting positive earnings each quarter. The majority are making money and are profitable. Unemployment is at historically low levels. Capital to start, run, and grow a business is relatively low cost and accessible. And consumers are spending money. All positive signs.

What may come as a surprise is that well capitalized companies with little debt can fare quite well during a recession. Companies that make things that people want or need to buy, also seem to do well.

But here’s the million-dollar question —

Should We or Our Clients Panic When the Media Sounds the Recession Alarm?

What you see on TV or read in the paper usually has at least a nugget of truth to it. However, consumer beware. The media outlets want attention, readership, or viewership more than anything else. If everything is perfect, and the world is doing just fine, we’re less likely to watch or read their content.

Should our clients be concerned when they hear the recession alarm bells in the media? I suppose it depends on how well they’ve prepared.

Ask them these questions.

Depending on the answers, they may have little or no concern as to when the next recession will occur because their lifestyle will likely be unimpacted.

On the other hand, if they aren’t adequately prepared to live through periods of economic slowing and potential market downturns — there may be cause for concern.

Proper planning and execution of a long-term strategy can build confidence and help prevent noisy media from wreaking havoc in your client’s mind.

Chances are, your clients will experience a recession or two throughout their retirement. If history repeats itself, they could be short-lived and followed by further economic expansion. It’s important to impress upon on our clients that these are naturally occurring events within a business cycle.

The real question is: How can you help your clients be adequately prepared to thrive in the future — recession or not?