For years, business was as good as David thought it could get. But about a year and a half ago, he started questioning whether there was way he could provide more value to his clients and get away from feeling like the stereotypical “product-pusher.” 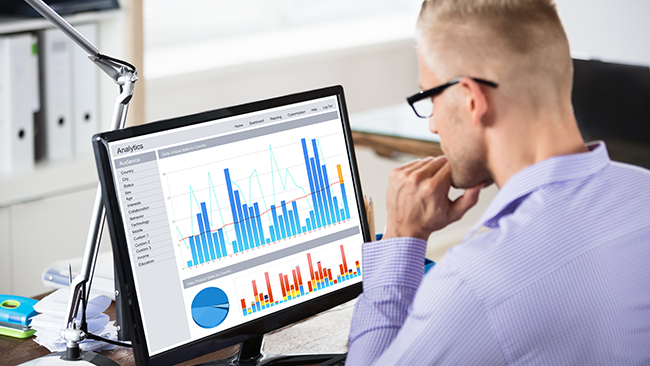 A former teacher turned insurance agent, in business for the last 10 years, David was wrestling with the fact that if his clients didn’t fit one or two scenarios, he couldn’t work with them. Although he’d been doing quite a bit of business, this hit-or-miss scenario wasn’t working for him anymore. So, when his contact at Partners Advantage reached out and said he understood the challenges with his current approach and believed there was a solution that would provide the comprehensive value he was looking to deliver, he was interested.

Forced to Sink or Swim

Although he loved learning, a throwback to his teaching days, when David found out the solution was a software program — he resisted using it because of the seemingly steep learning curve. Eventually, because he did trust his IMO’s judgement, he decided to give it try.

And his first two cases seriously tested him!

He was thrown into the deep end with his first client who had 14 different accounts. And his second client’s situation made him feel as though he’d been thrown in the ocean as they had three businesses as well as rental properties. In the past, he would have had no way to analyze the various aspects of the client’s financial situation and how each affected the other and affected the client’s overall financial goals.

Thankfully, David said, with the support and coaching he received both from Partners Advantage and the client service team at the software provider (who he reached out to 10-12 times), he was able to navigate through the initial growing pains of using the program. Additionally, he attended the 2-day live workshop that was put on in Denver. If he ever forgot how something worked or how to input a specific detail, the team was always friendly and helpful. When he initially gained access to the software site, he called on a Friday afternoon for help and one of the owners assisted him with login and sent him two introductory videos to get him started.

It wasn’t long before David had a system in place that flowed. But he still faced client challenges around asking someone he didn’t know for so much personal information — it was intimidating at first. However, he soon learned that if he asked for it over a few meetings, clients were much more apt to provide it with no complaints.

He now uses this progressive approach with all clients, which starts with asking for basic information in what he calls his “discovery meeting” where they determine if he and the client are a good fit to work together. Then he requests additional information via email. From there, it’s on to the 2nd meeting, or the “numbers meeting”, where he gets into the software program to enter information, walking the client through it tab by tab. By taking the time to walk the client through each piece, David was able to develop familiarity with the program before handing this part off to an associate in the office.

David typically has three meetings with clients before they ever talk product or strategy, which has allowed him to find out as much about the client as possible before making any suggestions. This approach is different than in the past because now, he can look at risk assessments and future assessments — something he wasn’t able to do with the Excel spreadsheet he previously used. It only gave half the picture and couldn’t account for continuous scenarios as situations changed — like this analysis software can. David says,

“It was like I went from being a teacher with no lesson plans to tons of lesson plans. The structure was important to me.”

Much more to offer

It’s just software, but what it allows him to do for his clients has helped improve the conversations. In the past, David said he looked at a pot of money here, a pot of money there to discuss where he might move it but now he’s …

There are still times he gets pushback from prospective as well as existing clients. Existing clients that have never gone through the process wonder why they need to now, but that’s usually resolved by explaining what he’ll be able to tell them once they do.

With prospective clients, he’ll run into situations occasionally where they balk simply at the idea of working with someone new. They’ll say they’re already working with someone, sometimes it’s a family member, so that makes them hesitant to answer the questions he has because it might feel like a betrayal of that agent. But David explains that the in-depth questions help him to determine whether there’s any room for improvement in their current situation. Once they understand that, they’re generally more open to at least going through the process.

The software gives his clients a more “scientific” look at their financial situation and they see firsthand how it can be improved — that’s when it goes back to being an emotional decision to work with him — because it’s clear that it will benefit their family.

If he ever worried that he wouldn’t be able provide the various solutions a client might need, he doesn’t any longer because he’s built out a referral network, including people he can use as resources. He’s still the main point of contact for his clients and they’ll even refer to him as the “Chief Operating Officer” or “command central” because he oversees everything.

Business has taken off

The results David’s seen from using this analysis software has helped his business soar. To him, the point of it all is being able to clearly see how he can improve a client’s life. Clients aren’t just worried about one thing, so every time they get together, it’s a matter of analyzing how he can continuously improve their situation.

It’s to the point now where clients send him information or contact him about changes because they want to know how it affects the big picture. David says showing clients the big picture has been a game-changer, especially when he can help them to retire two years earlier than planned, for example, or let them know of contracts they could move to better position themselves to pay their children’s college tuition or lower their family contribution. Of course, this approach takes more time, but all things worth doing, take time.

That being said — time is money. David says using the software has been a huge time-saver and made his work simpler because his system has structure. Compared to the results he’s achieving, the cost of the program is minimal, especially on a monthly basis.

David says his business has improved in every way, 5 to 10-fold — from the amount of annuity contracts he has on the books, to life insurance clients, to the number of ways he can help people.

He’s also gotten more referrals after implementing this program into his practice and will have people who say, We hear you use a retirement analyzer — we’ve never had anything done like that and would like to see where we stand.

Even if there’s nothing they need to change at the time, they still appreciate the reassurance that they’re on the right track.

Other times, a referral will approach him and say, I heard you helped my friend retire two years early — can you do that for me? David says clients seem to view him as the “A-1 financial person” because they’ve never received this level of assistance before and they leave his office genuinely happier knowing where they stand retirement-wise.

Should YOU try it?

When asked if he would recommend the software program to other financial professionals, he said,

“Yes. If you like to help entire families in multiple ways like I do and like giving them ideas about how their future can be improved, then this will make you feel really good.”

Retirement Analyzer is a third party vendor. The material is being provided for informational and educational purposes only and is not designed, or intended to be applicable to any financial professional or client’s individual circumstances. This content does not constitute a recommendation that anyone engage in (or refrain from) a particular course of action or to utilize a particular third-party or software program vendor. Utilizing third-party vendors does not absolve a financial adviser from their fiduciary responsibilities to their clients. Financial Professionals should ensure they continue to follow the current policies on the use of any advertising, third-party materials and/or social media as required by their broker/dealer and registered investment advisor, if applicable, and the insurance carriers they represent.