Driving Your Financial Business is Like Piloting a Powerboat

I’m a boater, and if you're not a boater, stay with me as I'm going to tie in my passion for boating to my passion for helping financial advisors! During the summer weekends you’ll find me wearing nothing but board shorts, flip flops, and a Vitamin D induced sunshine-smile. From my time on the lake, I've discovered that piloting a power boat efficiently through the waves reflects the processes needed to drive your financial business forward. 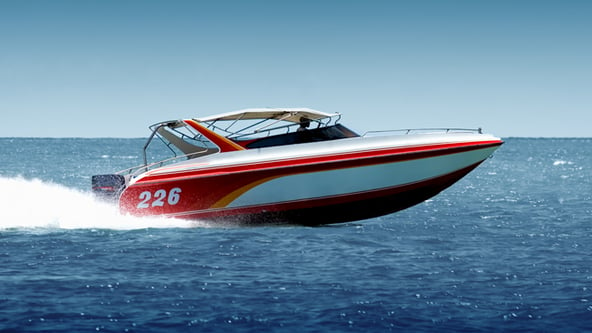 While many weekend boaters prefer the sustainability of sails, I like power. Gasoline power to be more specific. We don’t measure fuel consumption by miles, we burn it up by the hours per gallon. Who’s really counting though?

Most of the fuel consumption while operating a powerboat occurs before the hull gets on plane. Plane is when the boat's hull is out of the water with only a few inches of the vessel touching the surface. The boat essentially skips across the water. When less water touches the hull there is less water resistance, and better fuel consumption.

You see, the water around the hull resists movement. Progress in any direction, other than the direction of the current, requires a lot of energy. When you throw the throttle down and engage the propeller, the water fights back. Upon the initial thrust, the boat is performing in its least efficient state as it pushes massive quantities of resisting water out of the way. The motor is strained. The propeller’s efficiency is reduced. The energy from the fuel consumed is less productive. Then magic happens. It takes consistent propulsion in one direction to get the boat moving fast enough to rise out of the water, and to get on plane.

Once the boat breaks the water's resistance and raises, it takes very little effort to stay on plane. Just like that, you have momentum on your side. In what seems like an instant, the boat picks up speed. At the same time the engine feels less strain, efficiency increases and fuel consumption reduces. You could even cut back on the throttle three quarters to half and still stay on top.

When the boat's on plane it feels great! When I cruise the lake with my friends we spend most of our time on plane. In this state, we can run the lake for hours without stopping for fuel and cover great distances.

However, if you back off the throttle too far the boat sinks deeper into the water and falls out of plane. The water resistance quickly kills momentum, forward progress, speed and efficiency. Cut the throttle altogether, and the boat will halt to a stop in no time. Getting back on plane requires a significant effort and massive fuel consumption. Starting and stopping a boat means you’ll burn through gas, and not get very far doing it.

Consistency Over Exertion in Your Business

The principle of momentum affects driving your financial business in a similar way. You expend energy and effort over time to get your business started. At first, it takes a lot of effort to get going. Once you're rolling, it takes less effort to keep things moving in the right direction.

Let's say you are starting a new project. This is the kind of project that means real progress for you and your business. It can take a lot of effort to get started. The resistance is high. You may burn a lot of mental fuel and time with little to show for it. Weeks, or even months may go by before you see measurable results. However, with consistent action and effort in one direction, as if by magic, you catch momentum. You quickly gain speed and leap towards achievement.

You Need to Continue Moving Forward

Sometimes the resistance is so high that people fail to make it very far. They give up before catching momentum. They never get themselves on plane. However, those who manage to get momentum on their side become unstoppable. They pick up speed, and keep the progress going with little effort relative to what it took to get them moving. Momentum has kicked in and is pushing them along.

However, if you back off the throttle too much, become inconsistent in the actions and efforts that got you moving, the resistance creeps back in. Achievement-robbing resistance halts your progress. Allow this to happen, and you could grind to a halt. It will take a lot of effort and time to get going again. Will you have what it takes both mentally and economically to get going again?

Whatever you want to achieve, be consistent with you choices, actions, and efforts that push you in the direction of your goals. It will take time to see results, and just when you are getting frustrated, momentum kicks in. You’re now on plane, and can ease back on the throttle just a bit. Once you’re on plane you will be unstoppable.

One of the biggest untapped opportunities for you as financial advisor is leveraging all the technological advances available to you such as social media, video production services and web-based leads. If you are ready to learn how you can use technology to drive interest in your financial services business, request a copy of this eBook.